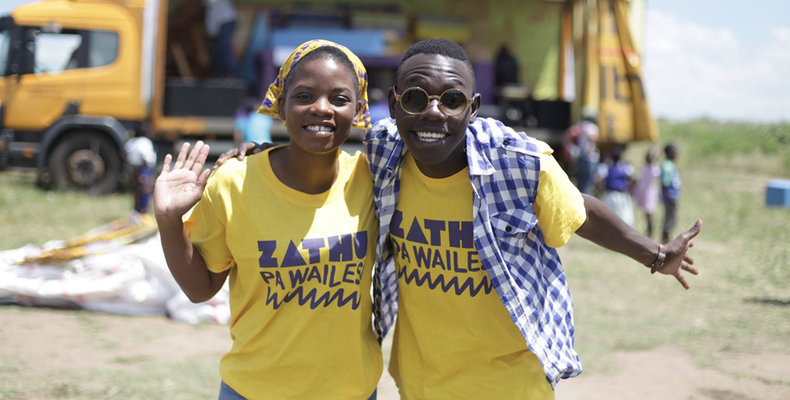 Five must-haves to launch the biggest youth brand in Malawi

The day I moved over to Malawi, I went to where the new Girl Effect office was meant to be and was told three things: “The office isn’t built yet”, “Our bank account isn’t open yet”, and “The power is out so there’s no internet”. It was the perfect introduction to what’s been a roller coaster ride since.

When asked to write this blog, I thought I’d share with you the five things that made launching Zathu possible:

1. Being locally rooted: It sounds obvious, but it’s the most important one. All the ideas for Zathu come from boys and girls and from the local team. They’ve got total ownership of the characters, the setting, the talkshow topics, and the sound. And we are run by a Malawian board. Of course, we’ve injected international talent (and I don’t mean me!) into the mix, but it is never forgotten that the answers always have to come from within.

2. The right strategy: Zathu is aimed equally at boys and girls from the start. Being totally inclusive, and closing the divides between girls and boys and young and old, is the fastest way we can improve the lives of girls in Malawi. It will help the brand, and its values, be widely embraced from the start. It’s an approach that has been welcomed by our partners such as PEPFAR, with Ambassador Birx describing it as “a genuinely groundbreaking approach to tackling the risks facing adolescent girls.”

3. Amazing talent: the sad truth is that there isn’t much money in the creative industries in Malawi. The plus side of that is it means people who are talented superstars are not out of reach in the way they would be in the UK. Some of the people we work with everyday are celebrities here in Malawi, like Faith Mussa – one of the biggest musicians in Malawi. We’ve worked with writers, poets, producers, presenters, vocal coaches, choreographers, and a music academy in the ghetto. And the six young stars that make up our cast/band are mind blowing. A good example is Esther who plays Chikondi. She’s left handed and wanted to learn guitar but there weren’t any left-handed ones available. So she took a ‘normal’ guitar, turned it upside down, and can play it beautifully in a completely unique way.

4. Shaking it up: On the surface it might seem that what we’re doing in Malawi isn’t revolutionary – there have been many NGOs here that have used radio or music. That’s why the way we do things has been so important, and why we’ve tried to do things differently. We’ve had week-long workshops in a run-down theatre space (because it’s a hotbed of local creativity); rejuvenated unusual and interesting cultural spaces for events (for our first event we renovated the national library, turning their main room into an intimate dining concert experience); and created an office space which feels like a youth media business. It all helps shape the hearts and minds of everyone working on Zathu, which then transmits to the work itself.

5. Building for the future: Even though Zathu is still relatively new, we are focused on the long-term. This guides some of our operational targets. For example, increasing sustainability by generating partnership income and reducing expat involvement. But it has also guided some of our activities on the ground. For instance, our big launch event could have been held at a stadium. But over 6 weeks, we instead renovated the local Community Ground, and built a giant stage out of wood which was subsequently turned into desks and furniture for the nearby school. In essence we have become a sponsor and part of the community we are trying to reach (they now hold Zathu listening clubs at the ground), and demonstrated our commitment the youth.

The stage used to launch Zathu at the Lilongwe community ground has now been recycled into school desks and furniture.

Of course, there have been challenges along the way – billboards stolen (people use the material for roofing); biblical thunderstorms washing our video shoot away; and a transport truck breaking our big screen on the eve of a 3-week roadshow. But we have always had the team and the talent to see us through.