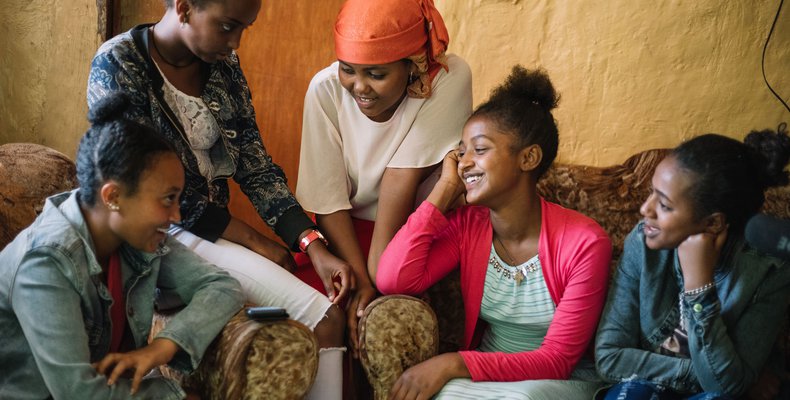 To end FGM in this generation, it can’t be tackled alone. We need to challenge perceptions around girls.

Published On: February 6, 2019Categories: In the News

Today marks the UN’s International Day of Zero Tolerance for Female Genital Mutilation (FGM). This form of violence against women and girls is still widespread across many countries, including Ethiopia where Girl Effect works, using storytelling to spark real change for girls. Jo Hemmings, Girl Effect’s Senior Director for Impact, explains why FGM is still prevalent across the country and what is being done about the problem.

The UN estimates at least 200 million girls and women alive today have undergone some form of FGM. The practice involves all procedures that alter or injure the female genitalia for non-medical reasons and is recognised by the UN as a violation of human rights. It is mostly carried out on young girls at some point between infancy and the age of 15, and can result in severe bleeding, health problems, complications in childbirth, and death.

In Ethiopia, the practice has been banned since 2004, but around 74 per cent of girls and women aged 15 to 49 have undergone FGM, according to UNICEF statistics.

Given the harm caused, it might seem surprising that there is continued acceptance of, and even support for, the practice among girls and women who are aware of FGM. In Ethiopia, this figures stands at some 31 per cent. This feels shocking, but demonstrates the deeply rooted social norms, myths, and gender inequalities underpinning FGM.

It is believed in some areas that girls and women who have not undergone FGM are ‘unclean’ or are unsuitable for marriage. Other groups believe FGM is part of their cultural identity, or perceive it to be a religious requirement. Parents may fear their daughter will be ostracised or stigmatised if she does not undergo FGM.

At Girl Effect we believe the problem can’t be tackled in isolation, rather we must look at the whole girl in her environment, community and culture. To end violence against women and girls, including FGM, we work to shift the social norms surrounding gender inequalities and change perceptions about girls.

In Ethiopia, our youth brand Yegna tells the stories of five girls and two boys through music, drama and TV to tackle issues including early marriage, domestic violence and abuse, education, friendships and relationships.

By reflecting the reality of everyday life for girls in Ethiopia through positive role models and relatable storylines, Yegna shows girls, boys and adults that different choices and options exist and that it’s possible to challenge the status quo.

The brand also reaches parents, community leaders, boys and men. In total 95 per cent of boy listeners say they would raise the alarm if they witnessed a young girl being forced into marriage – showing that gender norms are beginning to shift. Just as with FGM, changing the tide on culturally ingrained practices like these requires bringing the whole community on board.

On the ground in Ethiopia a number of organisations are working to tackle FGM directly, including NGOs such as UNICEF, Save The Children and Norwegian Church Aid. There are also active local NGOs such as KMG Ethiopia, which works to create a society where women are free of violence and abuse, including FGM. In August KMG organised a ceremony in the Bona Woreda district celebrating uncut girls, which brought people together to celebrate 10,000 girls who have not undergone FGM, their families and the men who marry uncut girls.

Demonstrating and championing alternative rites of passage for girls and young women can help to shift the myths and perceptions around FGM, and has seen the rate in areas KMG works drop from nearly 100 per cent to just 3 per cent.

Showing a new way forward is crucial to making FGM a thing of the past, which is why ceremonies like these are so effective, and why the role models in Yegna’s TV and radio dramas shift attitudes in girls and boys. By mobilising whole communities to tackle the social norms and gender inequality underpinning the practice, we can help to end FGM, in this generation.