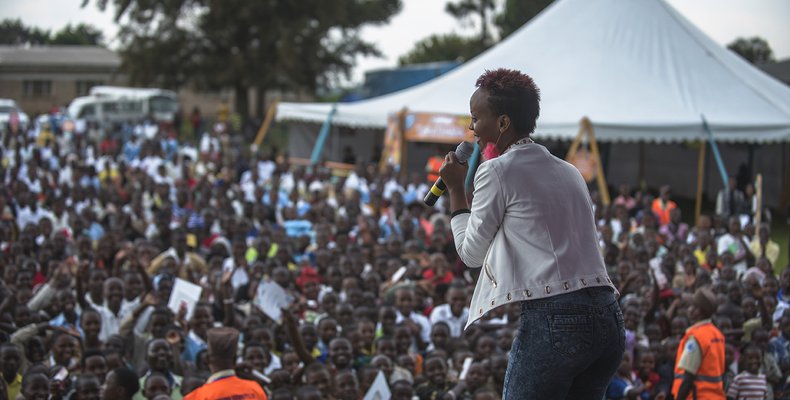 Published On: December 1, 2017Categories: In the News

To reach the millions of girls living in poverty, we need to work at mass scale. This is why our brands use a wide range of media channels to reach as many girls as physically possible.

Girl Effect brands therefore use a range of media to increase the opportunity our audiences have to engage and interact with us. We fundamentally believe that the more touch points our brands have, the more frequently our audience are able to interact with us and in turn, the more likely we are to create impact and change.

By tackling a difficult subject through entertainment, knowledge grows, and attitudes and behaviours shift over time.

One example is the mixed group band, Zathu, which focuses on the positive power of female and male friendships through music, radio and drama, while also challenging traditional gender stereotypes. Although captivating audiences around social issues is not a new practice, brands like Zathu are highly effective platforms on which to create positive change. From sensitively handling the problem of gender inequality and gender-based violence to exploring sexual reproductive health, Girl Effect’s culture brands are unafraid to tackle the tough issues.

“One of our dramas about a girl facing gender-based violence has motivated fans to get in touch with the show via social media and demand for the perpetrator to face justice,” says Ruth. “By tackling a difficult subject through entertainment, knowledge grows, and attitudes and behaviours shift over time.”

Inevitably, some countries are better suited to different media types than others, so before launching our brands we carry out extensive research into the media landscape to understand which channels have the highest reach and engagement, and why this is. This data is used to determine how we select and weight media channels in each of our brands. For instance, in Rwanda we designed a print magazine because a single national language, relatively high literacy rates and a small geographical area meant we could produce and distribute a magazine effectively to our target youth audience.

In contrast, Ethiopia is a much bigger country with a fragmented media landscape and more than 80 languages spoken. Here, radio was selected as the primary media channel for its Yegna brand. In this way, tailoring our brands to target youth audience at mass scale not only makes change possible, but a viable reality for millions.